GLACIERS
B  AND GLACIAL  A
LANDFORMS

All photographs were taken in the 1960s, so remarks such as “in recent decades” refer to the time period prior to the 1960s. 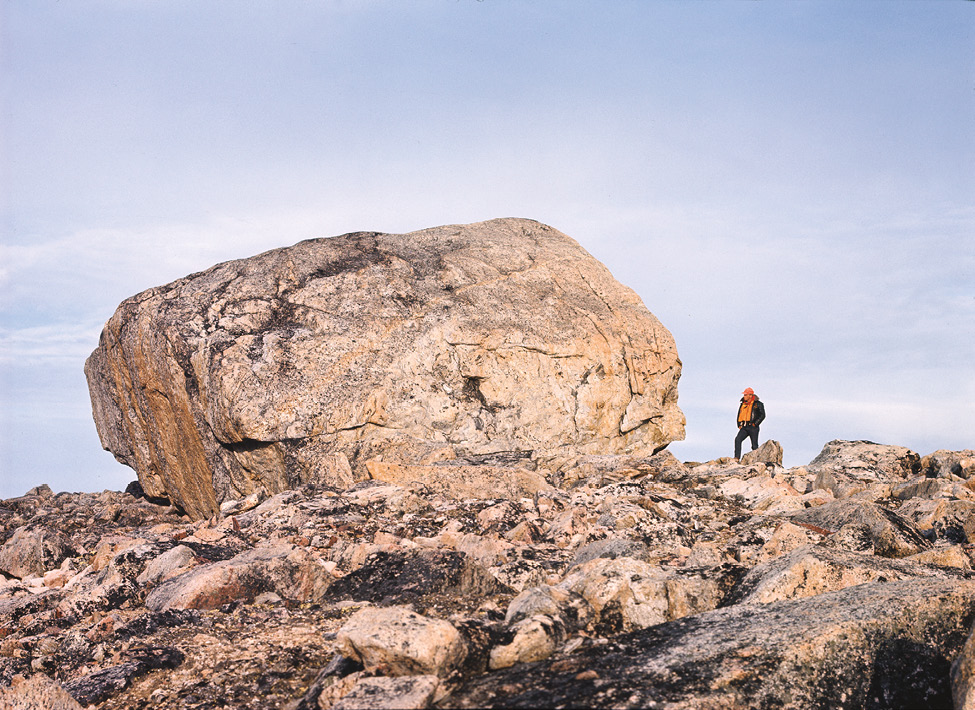 Fig. 83: Giant boulder forms summit of high mountain. This huge boulder forms the “capstone” of a 1,200-metre mountain in outer Inugsuin Fiord. Note human figure for scale. There are no indications in the immediate vicinity of former glacier activity, neither erosional nor depositional. Interpretation becomes a problem. Is it an erosion residual, such as a more resistant part of the bedrock left standing after eons of weathering? Or was it emplaced by a former glacier or continental ice sheet? Without supporting evidence, no definite conclusion can be drawn. However, a similar boulder forming the summit of Anvil Mountain more than sixty kilometres to the southwest supports a telltale small glacial erratic on its surface (see Fig. 32). It was therefore concluded that both boulders were probably put in place by moving glacier ice. 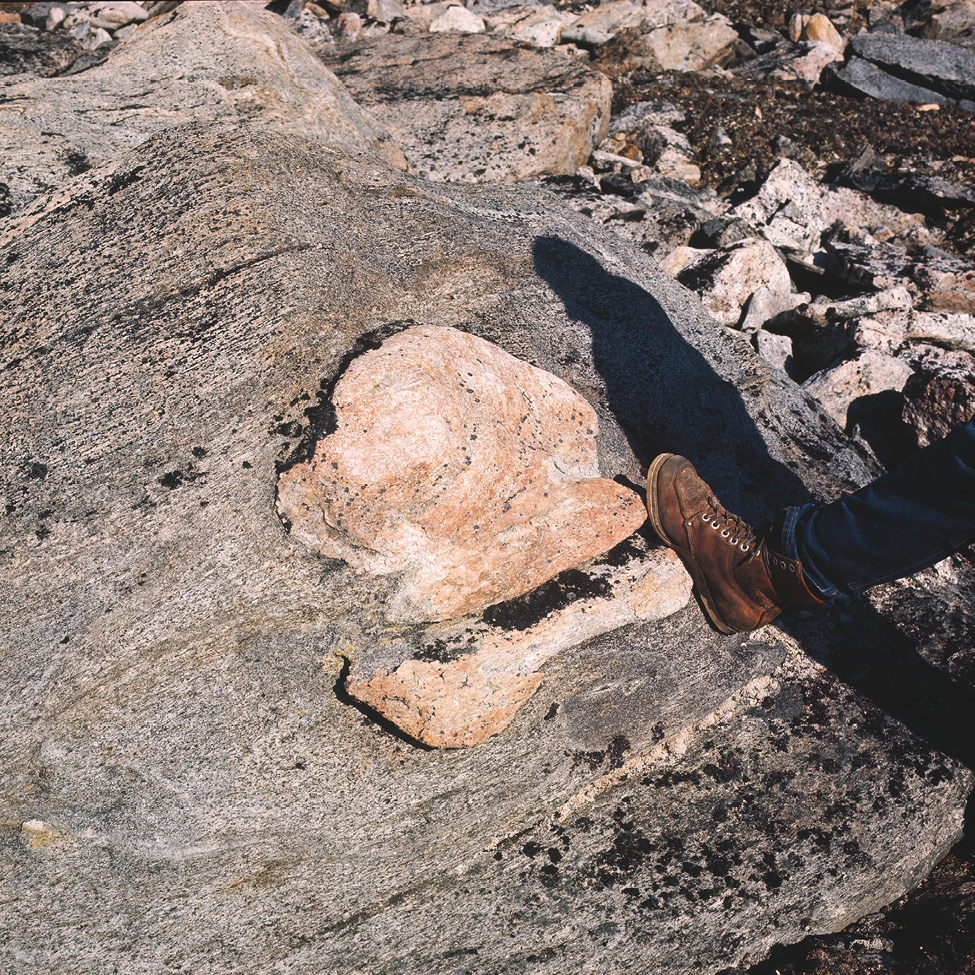 Fig. 84: A pseudo-erratic immediately before “birth.” The complex Precambrian bedrock of the eastern section of the Canadian Shield contains numerous rock types that differ markedly from the country rock into which they were incorporated. Differential weathering over a long period of geological time can release them onto the surface amid the rubble of mountaintop detritus. The example shown here is not yet detached. Some distant future researcher may discover it loose on the surface and conclude (incorrectly) that it is a glacial erratic. Examples were found in the same vicinity in all stages of “parturition.” We were even able to break one loose. This is a warning against hasty interpretation. 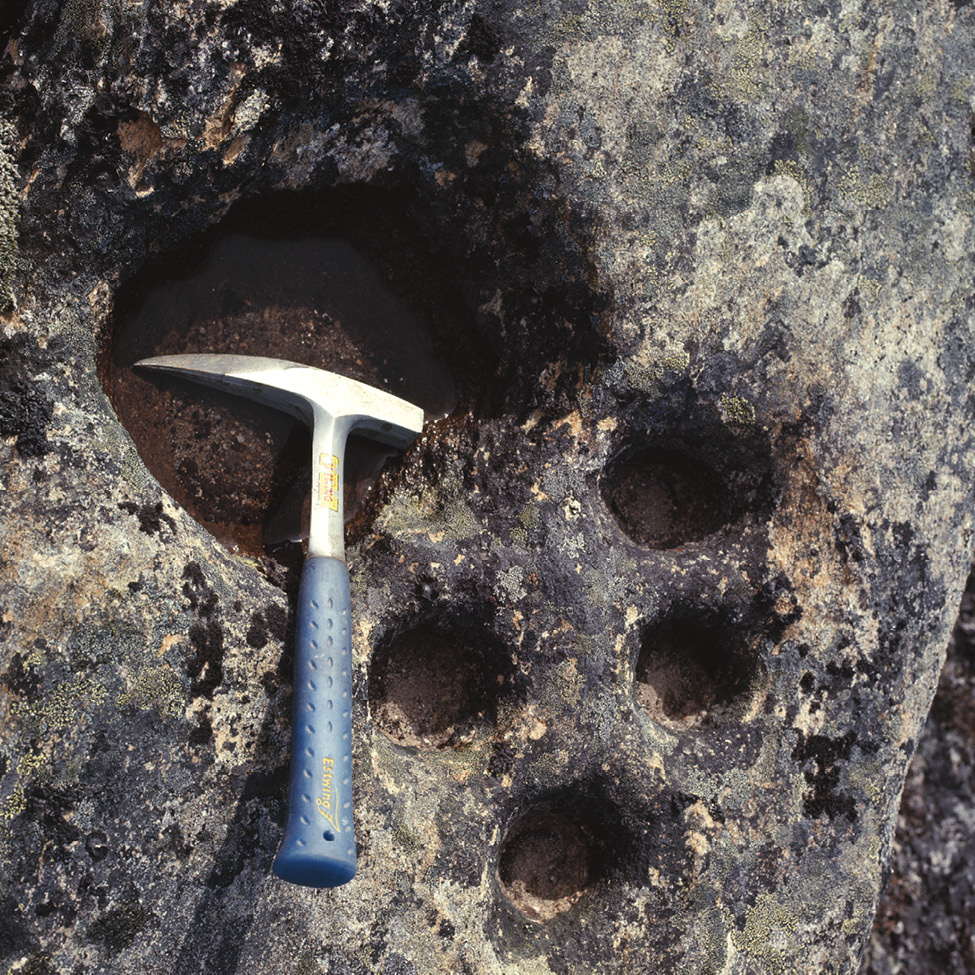 Fig. 85: Weathering pits constitute another possibly false lead. This example cannot be passed off as the ancient footprint of a polar bear. Large numbers of weathering pits occur in the summit zone of the high coastal mountains of Baffin Island and Labrador. Usually found within the mountaintop detritus, they have been interpreted as evidence of non-glaciation—or at least for the bedrock not having been scoured by actively moving ice. However, examples of weathering pits have been found at lower levels, although in much fewer numbers. These may have been protected in some way, for instance, under a cover of till. Again, interpretation is controversial, although statistical analysis has suggested that their numerically great preponderance in the summit zone may indicate an absence of actively eroding ice or a thin, cold cover of ice frozen to the surface. 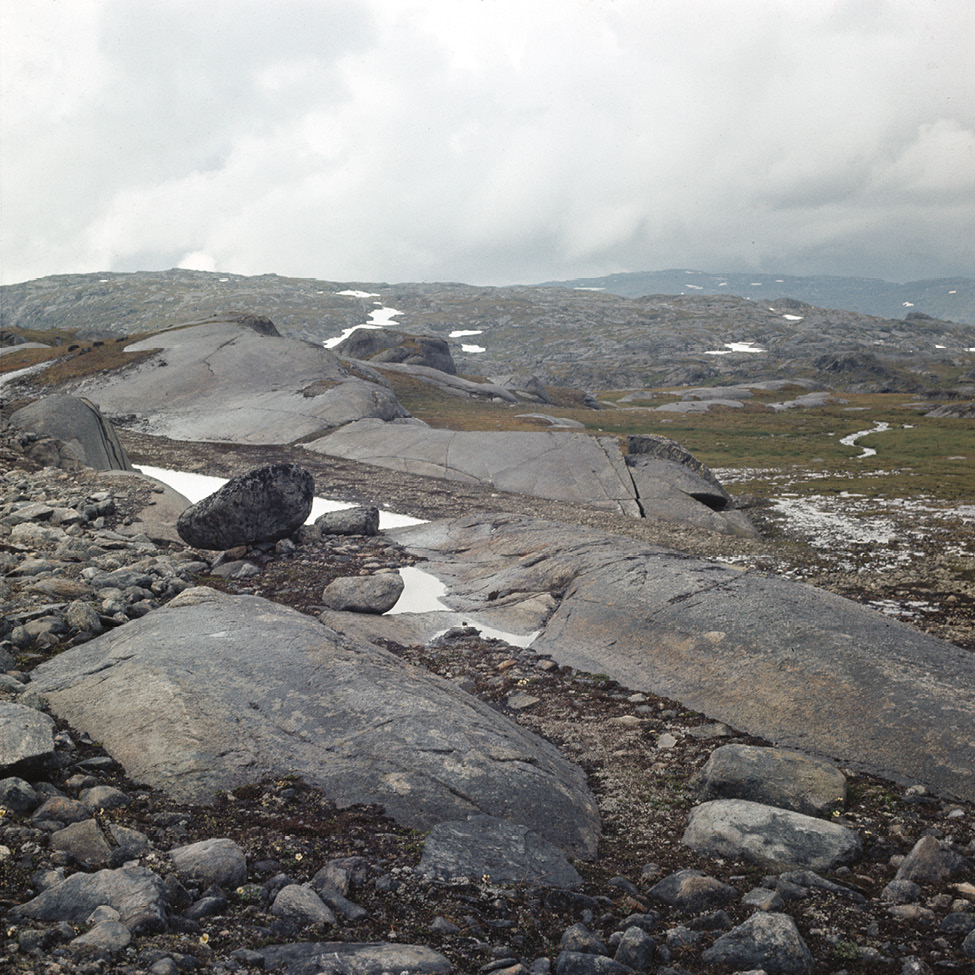 Fig. 86: Positive evidence of former glacial erosion. In contrast to the upper levels, or summit zone, glacially smoothed bedrock is both conspicuous and widespread at the lower levels. This example includes glacially moulded bedrock with a partially developed roche mountonée form. Perched boulders, even of the same rock type as the underlying bedrock, are definitely glacial erratics. The smaller cobbles, sand, and clay constitute glacial moraine (till). The moulded surfaces may show glacial striations, although they are also easily weathered by the coarse-grained bedrock. 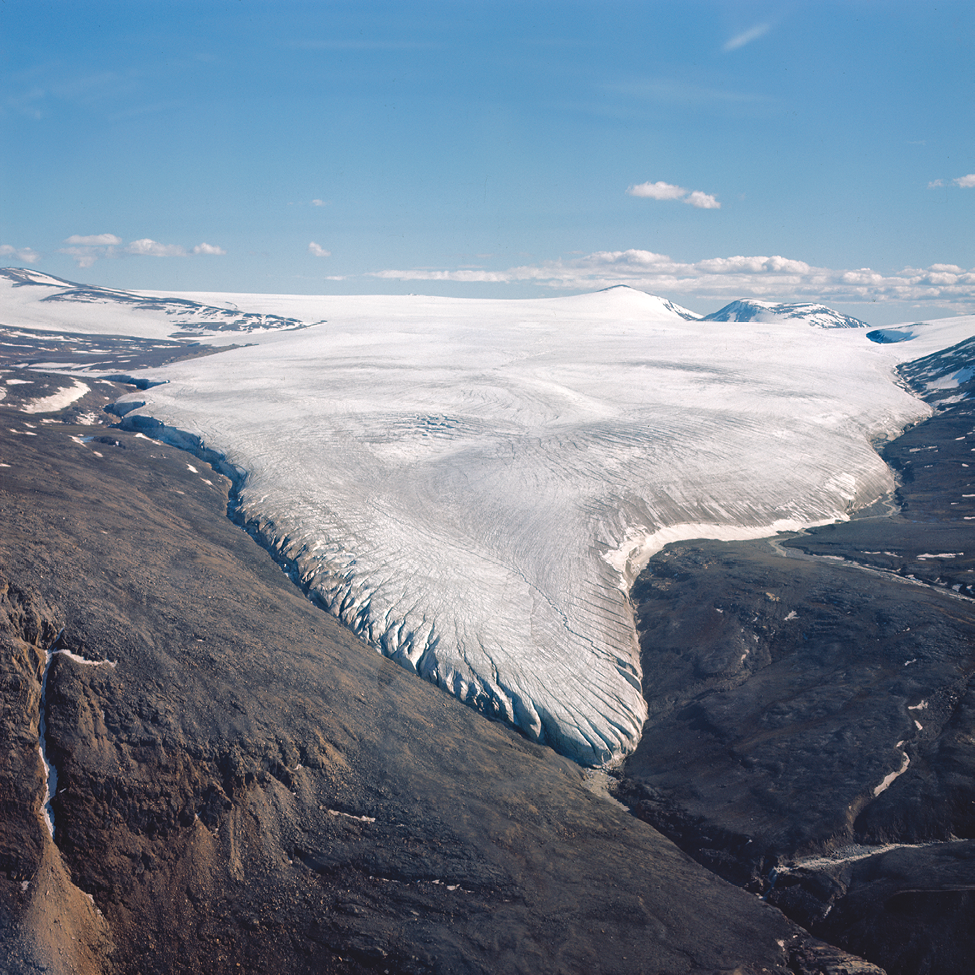 Fig. 87: Glacier showing no indication of recent retreat. This glacier, located near the head of Itirbilung Fiord, is in close contact with extensively vegetated ground—mainly mature rock lichens and mosses. There is no evidence that any retreat had occurred in the preceding decades. 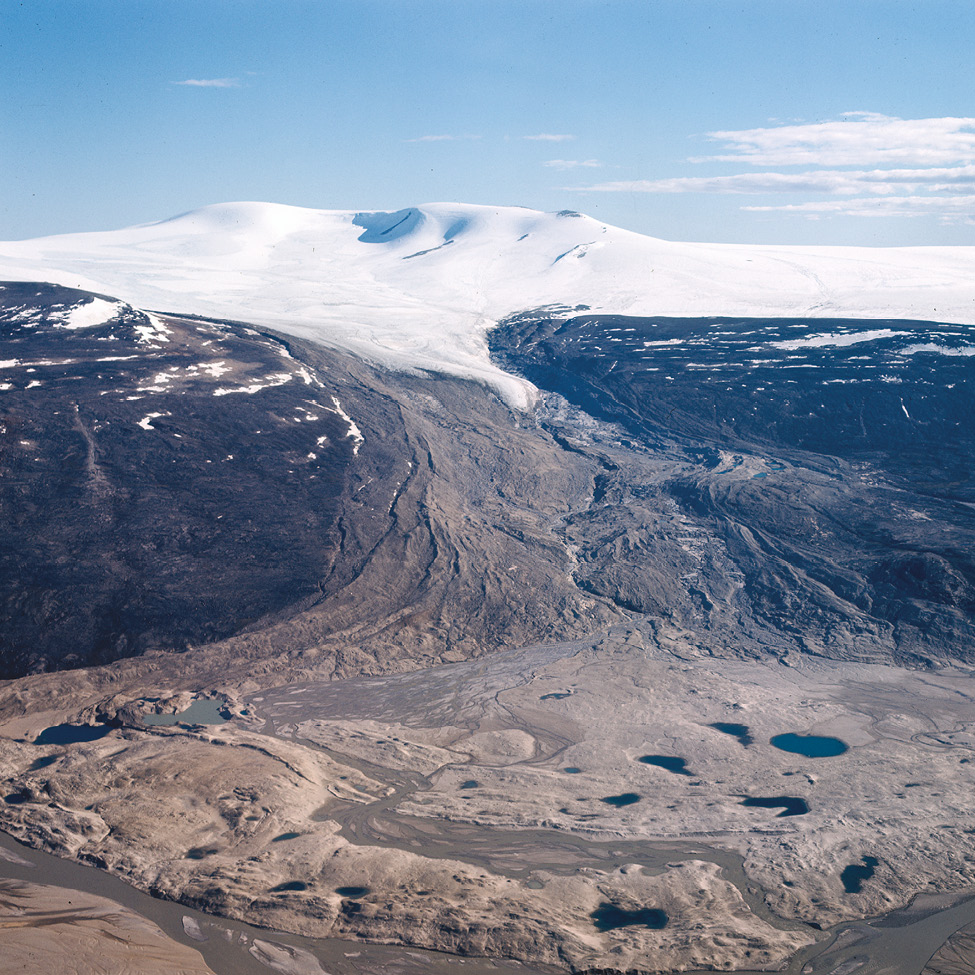 Fig. 88: Glacier showing evidence of extensive retreat. Little more than thirty-five kilometres from the glacier in Fig. 87, this glacier has obviously retreated more than two kilometres in recent decades. The very light tone indicates scant vegetation cover (i.e., lichens). The glacier’s former extent is displayed by the massive end moraines and associated features. Located near the head of McBeth Fiord, its orientation (north-facing) and gradient are similar to those of the Itirbilung glacier. The two photographs clearly illustrate very different glacier responses in a comparable environment. 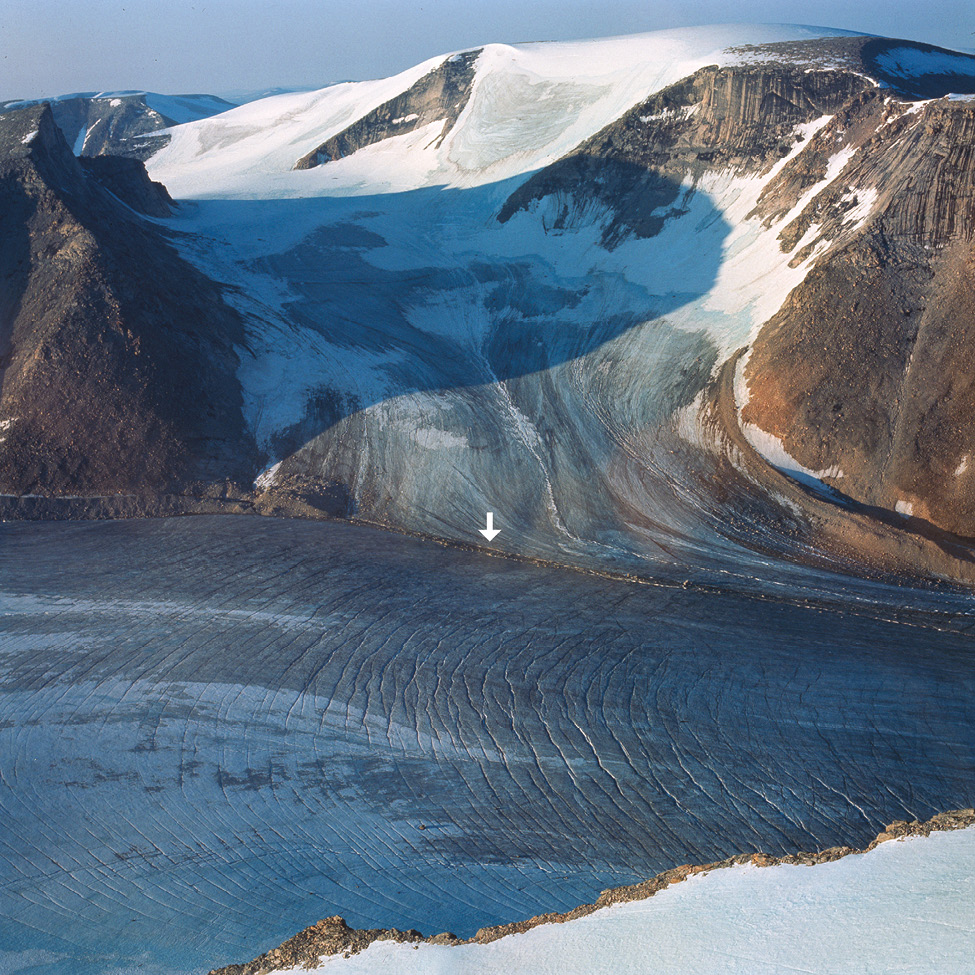 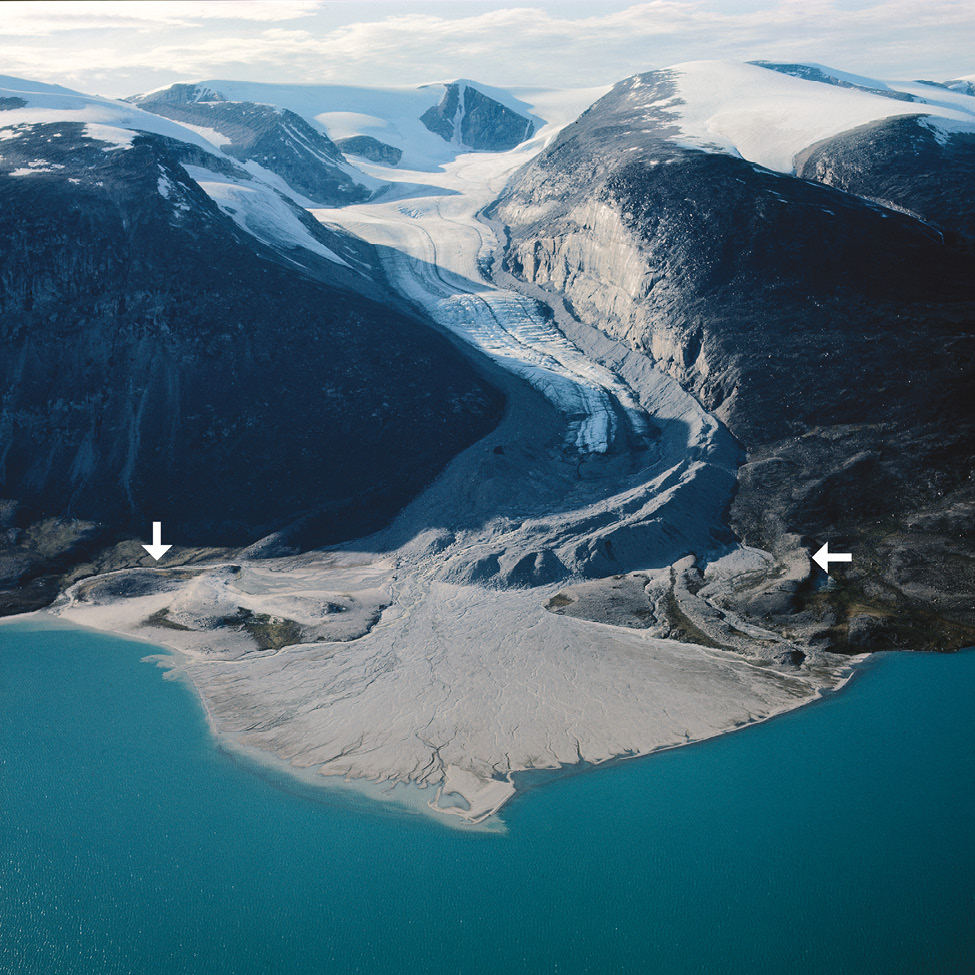 Fig. 90: Textbook example of a glacier and its marginal and frontal deposits. The outlet glacier descending from a highland ice cap north of inner Clyde Inlet displays a variety of associated landforms: the relatively recent (i.e., of the last 100 to 250 years) multiple-ridged lateral and end moraines; a conspicuous glacial outwash plain, or sandur, graded to sea level in the fiord; old, subdued end moraines on the outer edges of the sandur (marked by arrows); and medial moraines on the present glacier surface. 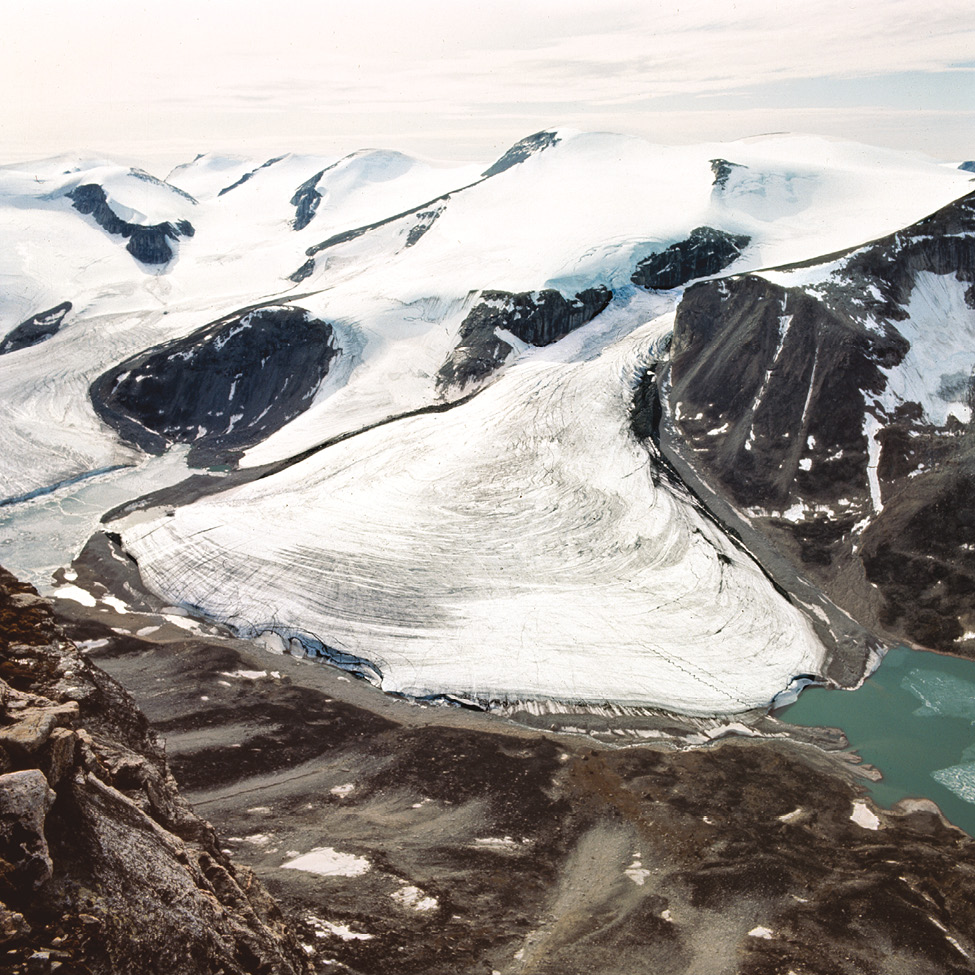 Fig. 91: The piedmont glacier. Where valley or outlet glaciers extend onto more gentle slopes—in this case, the floor of a wide pass—they often expand into a spoon shape under their own weight, hence the term “piedmont” (foot of mountain). The two piedmont glaciers shown here have blocked the pass, damming two lakes, the one on the left is still ice-bound. 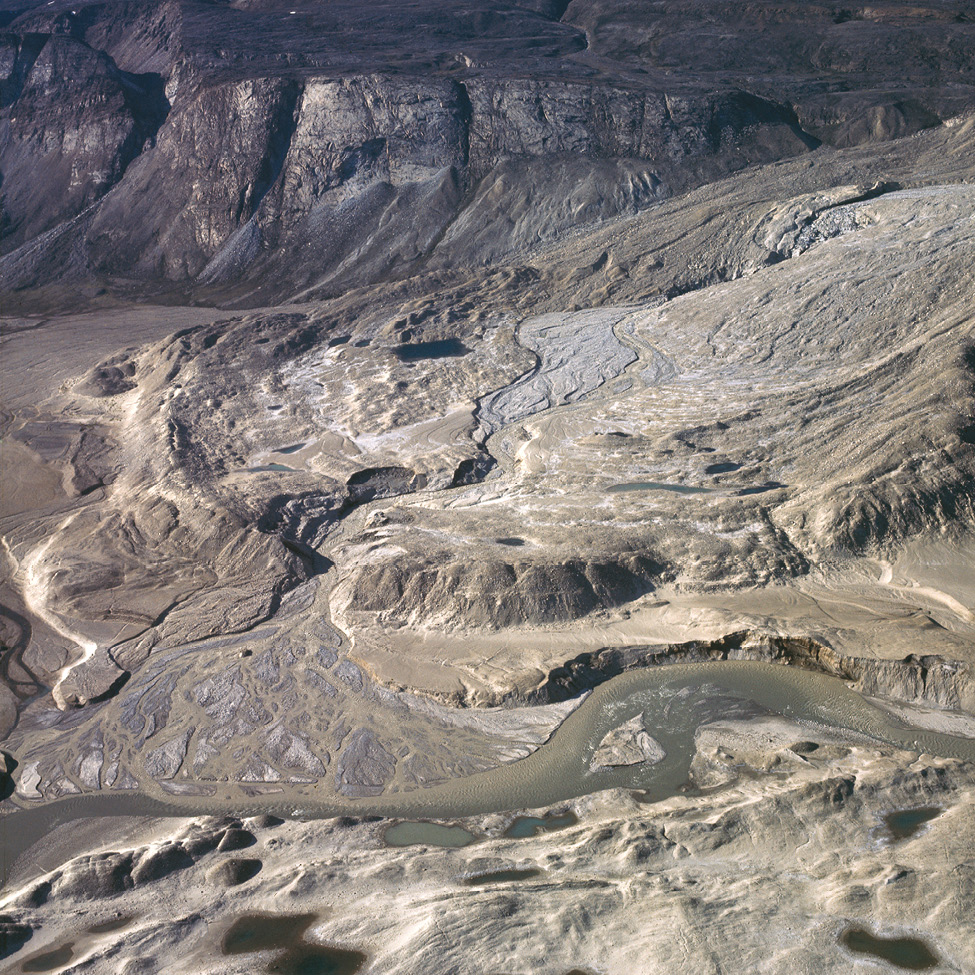 Fig. 92: “Skeleton” of a glacier. In regions with extremely cold climates, as glaciers retreat, thin, and waste away, many of their deposits and associated landforms are preserved, sharply etched on the landscape. This example shows remarkably distinct multiple moraine ridges, glacial outwash plains, and moraine-dammed lakes. As the climate gradually ameliorates, such features become much less distinct and may even disappear. This is because they have ice cores, with ice forming as much as 90 percent of the entire feature. 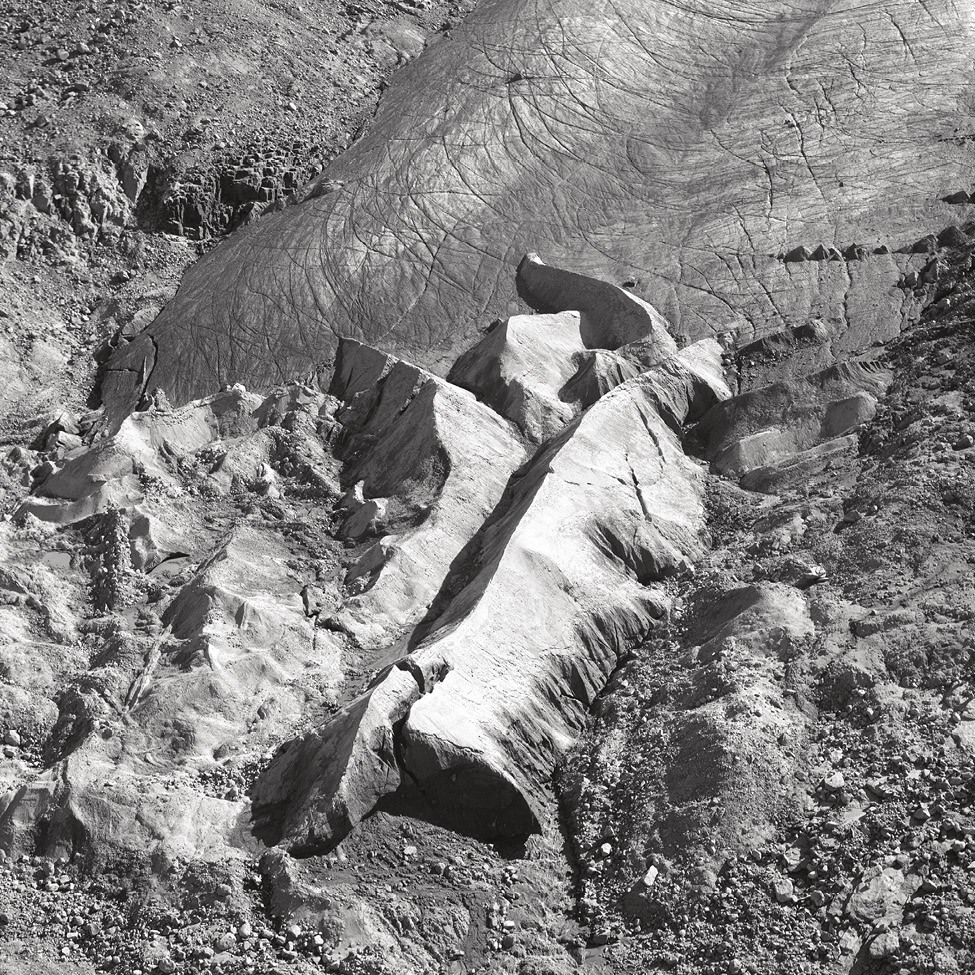 Fig. 93: Emergence of multiple eskers from glacier terminus (inner Inugsuin Fiord). The retreating glacier terminus has revealed a startling display of perfectly preserved eskers more than forty metres in height. The preservation is due to their extensive ice cores; therefore, subsequent climate warming will likely cause their collapse or even their entire disappearance as recognizable eskers. It would be interesting to replicate this photograph today—forty-eight years after it was taken—to see the effects of recent climate change.